Exchange
2009
Collaborative performance with Helen Horgan for Straying Closer, the closing exhibition of the Residency at thr Friary a month long residence program for artist's at the Franciscan friary at Mutlifarnum.

The Legs foundation formed with the collaborative performance: Exchange; a durational performative archiving project at the Straying Closer culminating exhibition for the artist residencies at the Friary at Multifarnum.

With the library as site we chose to consider labor/vocation and exchange by engaging with the materiality of the books themselves. About to be lost in the repurposing of the building, we used these books - deemed valueless as such - as brickwork in the construction of an alternative, informal space within the formal library. As book used was as material we produced an archive of in the ledger book shown below. Working daily for two weeks we recorded the title, author, and date of production (some were hand copied rather than printed) in a ledger book. Additionally a single arbitrarily chosen line was read allowed and recorded as an aural archive corresponding to the ledger.

Throughout the duration of the exhibition we worked in such a way as exhibition viewers, participants in the connected workshops, staff and residents, and artists came through the space. Through material transformation and our physical presence the live/work space became, the landing place, resting stop, and center of much of the social interaction sin the exhibition. The informality of the transformed space and the peculiarity o f the books themselves invited wonderfully surprising conversations with audience member, about the friary, about religion and faith; about books, and about the distinctions or indistinctions between art and life.
BACK TO EXCHANGE, 2009 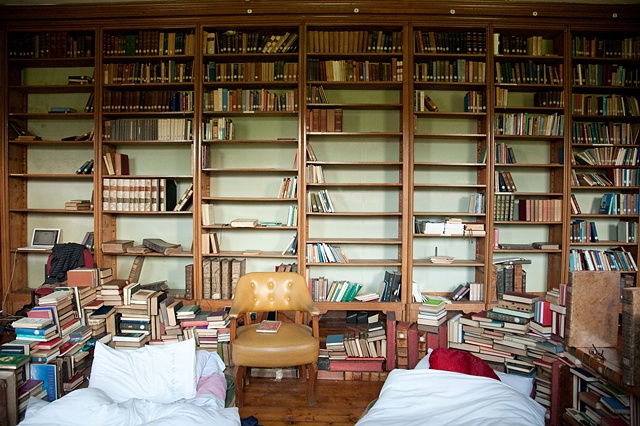